“A true comedian…just a laid-back dude with a bone-dry wit.”

“A sharp wit and a sexy brain.”

Matt was named “Comedian’s Comedian” in the 2014 Bay Area Stand Up Comedy Awards. He is a contributor to Savage Henry magazine, is part of the Ha Ha Heathens comedy tour, and produces shows around the San Francisco Bay Area.

Matt is a Northern California native and Bay Area resident. He enjoys sculpting, buying books faster than he can read them, and basketball. He has three exasperating daughters. He makes them eat too many vegetables.

Don’t let his laid-back demeanor and messianic appearance fool you, Matt Gubser irreverently slices through social conventions of all shapes and sizes with his razor-sharp wit, and recounts the absurdity of his experiences parenting, dating and aging. Also dick jokes.


Matt is a staple of the San Francisco Bay Area comedy scene and performs across the US & Canada. He has appeared in comedy festivals all over the country.  He is a part of the Ha Ha Heathens comedy tour and a contributor to Savage Henry Magazine. 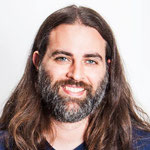